$120,000 Bed Bug Settlement at The Willows at Glen Burnie

When tenants move into bed bug infested apartments, and then landlords do not quickly treat the infestation, tenants have legal rights and recover significant compensation for the landlord failing to take the right action.

In 2019, Whitney, LLP settled a bed bug lawsuit for a total of $120,000 against Morgan Properties, as well as two other defendants, arising out of allegations that our clients, a mother and daughter, were leased a bed bug infested apartment at The Willows in Glen Burnie, Maryland and were forced to live with a bed bug infestation for months. Each defendant paid $40,000 to settle the claims, including another property management company and a Maryland pest control company.

Whitney, LLP has filed dozens of lawsuits against Maryland apartment complex property managers who fail to provide safe, clean apartments for their tenants.  If this happened to you, we can help.  Our landlord-tenant attorneys have recovered over $12,000,000 for our clients in bed bug claims and cases. Attorney’s fees and expenses are paid out of compensation we recover for you, and consultations are always free. Contact us now at (410) 583 8000, or use our Online Quick Contact Form and we will be in touch.

Bed Bug Infestation at The Willows Apartments in Glen Burnie 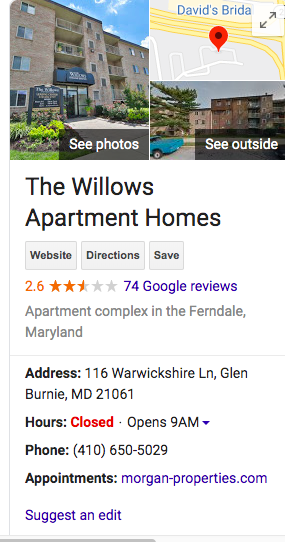 In an apartment complex, adjacent units to a bed bug infested unit must always be inspected to find the source of a bed bug infestation. Failing to inspect the adjacent units is a common failure of property management companies who do not want to spend the money or effort on treating an infestation, and instead just want to have a treatment done and move on. This is an ineffective and shortsighted view that leads to more problems for tenants, and creates significant legal liability for the property manager.

In this case, after our clients moved in, they immediately reported being bitten by something, and seeing tiny red insects they thought were ticks.  Despite their complaints, no treatment was performed for approximately four weeks, causing them to continue to be bitten without relief. Although management was fully aware of the history of infestation, they failed to disclose the history of infestation, even after our clients began to be bitten. After about a month, the property was sold and Morgan Properties began to manage it as The Willows at Glen Burnie.

Morgan Properties’ Did Not Inspect Adjacent Units for Bed Bugs

After Morgan Properties took over, several treatments were finally performed, and the infestation seemed to go away temporarily. However, just as before our client moved in the adjacent units were again not inspected in conjunction with treatment of our clients’ apartment.  Not only does failing to inspect the adjacent units cause the source to be overlooked, it also allows the infestation to persist and spread to other units.

After a few months, our clients again began seeing bed bugs in their apartment, and being bitten, likely due to the lack of proper treatment and lack of inspection of the adjacent units to determine the source of the infestation.  Our clients were forced to again deal with being bitten and having bed bugs infesting their apartment and causing misery. As the result of the two infestations, our clients were forced to deal with bed bugs during almost all of their one year tenancy, and they chose to end their lease and move out due to the infestation.

As the result of being forced to live with bed bugs, our clients were bitten dozens of times and suffered emotional distress from worrying about being bitten, being covered in bites, and worrying about spreading the infestation wherever they went.

Whitney, LLP’s bed bug lawyers tried to resolve the claim without filing a lawsuit.  However, we received lowball offers, causing us to file the lawsuit in the Circuit Court for Anne Arundel County.  After filing the lawsuit, we sued the pest control company as well once we determined standard inspection and treatment procedures had not been performed.

During settlement negotiations that took place before we filed suit, our attorney explained to both insurance adjusters that after we filed suit, we would obtain all of the pest control records, and the case would likely become stronger for our clients because we would find that there was a history of infestation that had been improperly treated. As it turns out, that is exactly what happened.

Despite the seriousness of the claim, they refused to offer enough money to compensate our clients for their bodily injury and emotional distress. Suit was filed, and the pest control records regarding the prior infestation being improperly treated is exactly what was discovered. The pre-lawsuit offer  was raised from approximately $25,000, to $120,000 after months of litigation, and the matter resolved.

Whitney, LLP’s bed bug lawyers have filed many lawsuits against Morgan Properties in Maryland involving claims of tenants being moved into bed bug infested apartments, and infestations being improperly treated. 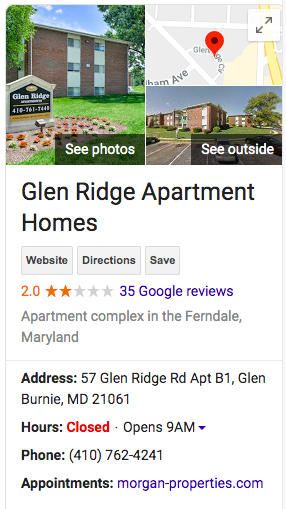 While most cases settle confidentially, this matter was not confidential, and neither was another $55,000 settlement against Glen Ridge Apartments in Glen Burnie, also managed by Morgan Properties and also involving allegations of improperly treated bed bug infestation. That claim was reported in the news by Barry Simms with WBAL-TV in Baltimore. The link to the story is here.

In the $120,000 settlement involving The Willows Apartments and the $50,000 settlement involving Glen Ridge Apartments in Glen Burnie, the facts were similar. A family moved into an apartment, and began to be bitten by bed bugs. After filing a lawsuit, more information was discovered that made the claim stronger, and the case was eventually settled.

While the experience was disgusting and upsetting, our clients recovered enough compensation to recover their losses from infested property they threw away, pay their medical bills for any treatment received, and to make up for the bites, emotional distress and worry they felt when dealing with the infestation through no fault of their own.

What To Do With Bed Bugs In Your Apartment

If you moved into a Morgan Properties apartment complex, or any other apartment complex in Maryland, and were forced to deal with a bed bug infestation, you should know that you have legal rights that Whitney, LLP’s attorneys know how to apply for your benefit. We offer legal consultations, and there are no out of pocket attorney’s fees or expenses. All attorney’s fees and expenses are paid out of compensation we recover for our clients. We have recovered over $11 million for our clients in bed bug infestation cases.

We handle bed bug claims and cases against apartment complexes located across Maryland, including but not limited to Baltimore, Middle River, Annapolis, Columbia, Silver Spring and Waldorf.