Whitney, LLP’s bed bug lawyers handle bed bug claims that vary in size, from a few bites, to dozens of bites, to hundreds of bites.  Recoveries in these cases can range from a few thousand dollars to large, six figure recoveries.  The injuries sustained from bed bug bites can range from itching and irritation to permanent scarring, anxiety and emotional distress.  The value of what bed bug claims and bed bug lawsuits are worth is determined by factors including the severity of the bites, whether the property manager was on notice of bed bugs, whether medical treatment was received and to what extent injuries are long term or permanent, and, perhaps most importantly, what is your lawyer’s reputation, whether your lawyer is experienced, and whether they are willing to file a lawsuit on your behalf if a reasonable settlement cannot be reached.

Whitney, LLP is well known in the hotel and apartment property management industry for filing bed bug lawsuits to obtain maximum compensation for our injured clients.  We have recovered large settlements and record verdicts for our clients in bed bug cases.  When we undertake representation of a client in any injury case, including bed bug cases, our clients do not pay any money to us out of pocket. We front all expenses, and only receive attorney’s fees and recover our costs once we achieve compensation for our client.  Read here What Our Clients Have To Say About Their Experience With Us.

In the case described in this blog post, we filed a lawsuit after the insurance company refused to make an offer to settle.  Because this was not the first time we had sued this Hotel chain for bed bugs, we already had gathered a significant amount of information about their operations and operating procedures.  After filing a lawsuit and engaging in settlement negotiations with the hotel’s lawyer, the case settled within weeks.

Facts of Our Hotel Bed Bug Case In Rockville, Maryland

Our client checked into the Hotel on or about May 25, 2015. He, along with his coworkers, checked into the Hotel for the purpose of staying there while working on a local construction project. After spending several nights in the Hotel, he began to notice rash-like itchy red bites on his skin. When the itching and marks began to spread across his body, especially on his forearm in the form of an abscess, he sought medical treatment. After initially seeking medical treatment, he returned to the room.  Shortly thereafter, he discovered an infestation of bed bugs therein on the mattress and box spring. 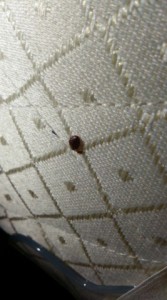 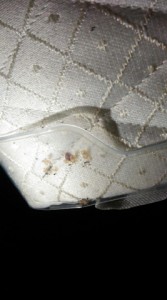 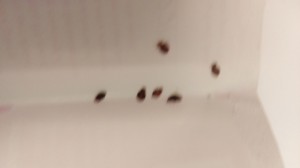 The photographs above, taken by our client after he was bitten in the Hotel room, show the extent to which the bed bug infestation was present in the room at the time he was placed in it. One photograph depicts an adult bed bug in a clear plastic mattress corner guard surrounded by bed bug nymphs (baby bed bugs) and casings (old shells, discarded as the bugs grow). Another photograph depicts six large, adult bed bugs that he captured in his room. The Hotel’s Bed Bug Protocol, which we obtained in a prior lawsuit after suing the same Hotel chain,  if followed in this situation, would have immediately required any Hotel housekeeper who had actually inspected the room and found bed bugs to have quarantined the room and never allowed any guests to be placed in it until the room was treated and cleared by a licensed pest control contractor.

As you can see from the photographs above, there is no question that the bed bugs and signs of bed bugs should have been detected by the Hotel’s housekeepers during daily inspections per the Hotel’s Bed Bug Protocol. In total, our client was bitten dozens of times by bed bugs while staying at the Hotel. He suffered bites across his entire body, including his arms, forearms, thighs, calves and stomach.

In addition to the bed bug bites he suffered, our client contracted a secondary infection as the result of being bitten by bed bugs and having open bite wounds on his body.

While laws and regulations vary from state to state, one of the principles that remains the same is that hotels are required to provide clean, safe and sanitary hotel rooms to their guests.  If a hotel room has a defect or a dangerous condition, it should never be provided to a guest.  When a Hotel guest is bitten badly by bed bugs while staying in one of the Hotel’s guest rooms, the Hotel failed to detect the infestation of bed bugs therein.  Hotel industry standards require daily inspections of a hotel room for bed bugs by a trained housekeeping staff.

By placing our client in such an obviously infested Hotel room, it was evident that the Hotel had breached the duties they have to our client.  The dozens of bed bug bites, emotional distress and the secondary infection that our client sustained were each the direct result of being placed in the infested room.

After our client hired us, we brought an insurance claim against the Hotel.  When the insurance company repeatedly failed to respond to our phone calls and letters seeking an offer, our bed bug lawyers filed a lawsuit against the hotel’s operator, local franchisee and corporate parent company.   Causes of action included negligence, fraud and violation of Maryland’s Consumer Protection Act.  After bringing to the insurance company’s attention that several months before we had recently won a $100,000 jury verdict against Red Roof Inn in a bed bug case with a similar set of facts, the case settled.

Our clients who have been injured are never asked to pay any expenses or costs out of pocket.  We front all expenses, and our attorney’s fees and costs are paid out of compensation we recover for our clients.  Call us today at 410 583 8000, or send us a Quick Contact email through our website.  An attorney from Whitney, LLP will contact you regarding your free Case Evaluation.