A six person Baltimore City jury awarded $90,525 to our clients in a Section 8 bed bug case on October 2, 2015 after a 3 day trial.  Our clients rented a duplex from Defendant KSA Investments LLC in order to accommodate their growing family of a mother, father, three young children and another baby on the way.  Although the house, located at 2210 Echodale Avenue in Baltimore, Maryland, appeared to be in good shape during the walk through, the hidden infestation of bed bugs was not disclosed to our clients prior to the lease being signed.

There was no question that the house was known to be infested with bed bugs.  Approximately 30 days prior to our clients moving into the house, the landlord had hired a pest control company to inspect and treat for bed bugs.  The pest control technician confirmed a “heavy infestation” of bed bugs, and recommended that two treatments be performed.  Instead of following the recommendation, the landlord declined to have the second treatment performed, and allowed our clients to move into the infested house without disclosing the ongoing infestation or that he had declined to follow the technician’s recommendation.  Because bed bugs usually hide in tiny cracks, crevices, and in the walls of houses, there is no reason that a person who is not looking for them, and has not been trained to find them, would ever see them.  In this case, the bed bugs made themselves known once our clients moved in.

One of our clients testified that as soon as he laid down on the bed on the first night in the house, bed bugs began to swarm out of the wall.  Having never seen bed bugs before, our client called the landlord.  Instead of calling a licensed pest control contractor, the landlord sent over an untrained person dressed in dirty clothes to the house later that night.  The mystery person told our clients that “Sammy (the landlord) sent me,” then proceeded to begin to spray an unknown chemical throughout the house while our clients were still inside.  The chemical caused of our clients to have trouble breathing, and caused one of them to seek emergency medical treatment.  During that first night in the house, several of the children were bitten, despite their mother staying awake to brush the bed bugs off them as they slept.

There Were No Other Options Than To Sleep In The Car

On the morning of the second day at the infested house, our clients decided that the house was not safe to live in.   They slept in their car for over a week before locating another place where they could stay with family until they were able to get back on their feet.  They threw away almost every piece of personal property and clothing they owned to avoid infesting their car with bed bugs, and were left with essentially nothing but the clothes on their backs.

There was no question that the house was infested with bed bugs.  Five days after our clients moved out, a Baltimore City housing inspector inspected the house.  His findings were: “Bed Bugs throughout unit, heavy infestation.”  That inspection, along with pictures of bed bugs crawling on the floor, demonstrated to the jury that the house had been badly infested at the time it was rented to our client.  That same evidence allowed us to show the jury why it was reasonable for our clients to have moved out after the first night. 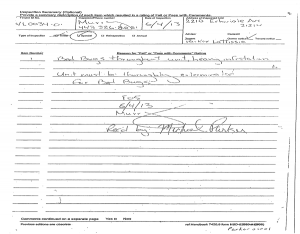 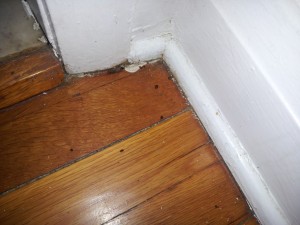 Parker Trial – Seven Bed Bugs crawling on the floor on the first night.

Three Day Trial Returns A $90,525 Verdict For Our Clients

The six person jury returned a verdict after deliberating for about two hours.  The verdict against the landlord, KSA Investments, LLC was based on negligence, fraud, and violation of Maryland’s Consumer Protection Act.  They awarded $18,000 in compensatory damages for bodily injury, emotional distress and property damage.  They also decided that the landlord needed to be punished for their actions, and awarded $72,525 in punitive damages.  The verdict is believed to be the largest bed bug verdict ever in Baltimore City.