Bed Bug Information: The Scope of the Problem 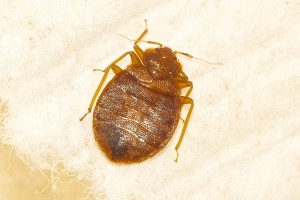 1. The Nature of Infestation

Bed bugs start out as practically invisible creatures, microscopic in size and without any marked color by which to easily spot them. However, they can grow to roughly five millimeters in length (the size of a ladybug or apple seed, being the longest in size after feeding) and develop a brown hue that often darkens further with a reddish tint once they are engorged with blood. Bed bugs have an average life span of six months to a year, during which time a female bug can lay up to 500 eggs – sticky sacks of offspring that adhere easily to most surfaces – sometimes at a rate of five per day. The eggs will hatch in four to five days, presenting nymphs that begin feeding immediately. Their general routine is to attack at night, with peak feeding time occurring just before dawn. The insects fill up on blood from a nearby host – drawn to humans’ high body temperatures, sweat and exhalation of carbon dioxide. A typical feeding, which occurs about once a week, lasts three to twelve minutes and involves piercing the skin of the host with two hollow, tube-like appendages: one to inject its saliva, comprised of anesthetics and anticoagulants, and another to suck out the host’s blood. Estimates vary, but the average span of time that the bugs can live without feeding ranges from one year to 18 months.

Besides awakening with bug bites, early indicators of an infestation of bed bugs include tiny brownish or reddish dots on bedding, which are spots of the bugs’ fecal matter; small blood stains on bed linens from bugs that were full of blood as they were crushed by a person’s movements during sleep; and a distinctly sweet, pungent odor that is secreted from their glands – most likely the pheromones that the bugs use to communicate.

Whitney, LLP represents tenants in apartment bed bug and hotel bed bug cases throughout Maryland, and consultations are always free. Call us now at (410) 583-8000 for your Free Consultation.

In a multi-unit apartment complex, bed bugs may invade an apartment from other infested units within the building. The insects have been known to spread among rooms and across localized areas on their own accord, traveling through holes in walls, such as those for running cable or other wiring between apartments or rooms, as well as rain gutters and water pipes. While they do not fly or jump, they are capable of crawling to various locations within a building. Perhaps most disturbing is their skillful climbing ability; bed bugs have been known to climb up a wall and onto the ceiling for purposes of dropping onto their victims.

To make matters worse, bed bugs are known for being difficult to get rid of, even with the employment of a professional exterminator. In the hotel context, experts say that a proper approach to eradication requires inspecting all adjacent rooms to the unit being treated, as well as rooms located on floors above and below that area of focus.  Moreover, the use of at-home chemical remedies is likely to have the opposite effect of the desired result; for instance, the use of “bug bombs” will simply spread the bugs out further, sending them into new areas rather than stopping them in their tracks.

While the most “common” clinical response to bed bug bites is yet undetermined, there is no question that there can be wide-ranging health effects from interaction with the insects. Bites are typically found in itchy groupings of three; the presence of multiple groupings is generally indicative of more than one bug feeding on the host. Reactions to bites vary, presenting in either cutaneous (skin-related) or systemic forms; moreover, the body’s response to being bitten is not always immediate, taking up to two weeks in some instances.

Although not all individuals bitten by a bed bug will have a visible welt or lesion, some people can experience severe or complex reactions that go beyond a simple itchy spot and may develop permanent scars. Secondary bacterial infection, such as cellulitis or folliculitis, is also possible, which can exponentially increase the distress associated with a bite. From a systemic standpoint, bed bug bites can cause reactions ranging from slightly distressing to serious, including anaphylaxis (a severe, whole-body allergic reaction, generally brought on in response to the insect’s saliva), asthma and generalized urticaria (hives). Treatment generally involves the application of topical agents, although antibiotics may be indicated if a bite has resulted in infection. Similarly, epinephrine, antihistamines or other typical allergy treatments may be called for in the event of anaphylaxis.  A plausible mechanism exists for bed bugs to transmit disease. See:

The Focus of the Problem

The most commonly thought of locales for bed bug-related issues are hotels and similar lodging facilities. Theirs is a problem of high traffic: the sheer daily volume of guests coming in and going out of these facilities presents the greatest opportunity for bed bugs to be carried in on luggage, clothing and other personal belongings.

However, wherever people gather, bringing themselves and other items in from the outside, there is the potential for introducing a few additional guests into the environment. Other places that are ripe for bed bug infestation include apartments or condominiums, dormitories, hospitals, movie theaters, homeless shelters, summer camps, cruise ships and dry cleaners. In one case, a claim was even brought by an alleged victim of bed bug bites against the landlord of her employer’s office building. The employee claimed to have been bitten at work, leading to an inability to perform her job duties and the development of post-traumatic stress disorder, as well as nightmares and a fear of bringing the bugs back to her home where they could bite her baby.

If you wish to learn more about how Whitney, LLP can help you with apartment infestations in Maryland, read our bed bug blogs or watch our YouTube channel for more information regarding our many bed bug case results