A dealer kept the down payment after a sale fell through despite having no legal basis to do so.  Our customer purchased a vehicle from a Maryland dealer.  After he took delivery, but before he had made his first payment, he realized that the vehicle had severe problems and could not drive without shaking at highway speeds.  He called the finance company, who told him to call the dealer.  The dealer said they had bought the loan back, but the finance company told him that was not true.

With the first payment being due in a few days, our client did not know what to do.  He did not want to make the payment for the damaged vehicle, and he also did not want to get a repossession on his credit.  He testified that the dealer called him multiple times and threatened him with repossession.   He then returned the vehicle to the dealer. 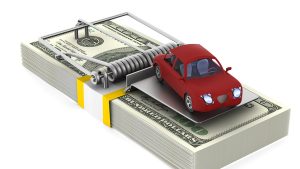 The Dealer Kept the Down Payment After Vehicle Returned

After returning the vehicle,  the dealer refused to return his $5,500 down payment.  They dealer kept the down payment based on a document that said the deposit was non-refundable, and also because they had a sign on the wall that listed various fees they could charge if a deal was cancelled.  However, neither of those basis for keeping the down payment was legal. In fact, both were illegal.

After the dealer kept the down payment, our client hired Whitney, LLP’s dealer fraud attorneys.  We filed suit, and the dealer refused to return the downpayment.  So, we pursued the case, and had a hearing.  The result was that a judgment was entered against the dealer for over $66,000, including $30,000 in attorney’s fees.

The actual arbitration order in the case, issued by the judge, with minor edits, is pasted below.

Arbitration Order from the Case

The parties, hereinafter “Plaintiff and “Dealer” have a dispute arising out of the purchase of a 2013 Ford Explorer, and the parties elected to have it resolved by arbitration in their written Agreement of November 23, 2020, having further agreed in writing to have the matter resolved before me by way of an Arbitration conducted in lieu of any AAA Arbitration contemplated by the parties’ 2020 agreement. This case came before me for arbitration February 4, 2022. The case was well presented by counsel for both sides. Testimony was taken and exhibits were received.

In November of 2020, Plaintiff found a 2013 Ford Explorer advertised for $13,999 on Facebook Marketplace by Dealer and communicated with Dealer’s representative, OWNER, and went to see the vehicle on the evening of November 20, 2020.

Deposit Claimed to be Nonrefundable

Though the price increased to $15,500 (Plaintiff says he was told that the increase was due to “bank” fee due to his bad credit, and Dealer says the increase was due to money it had to spend to get the vehicle through the Maryland inspection), he agreed to purchase the vehicle and made a down payment of $1,000. Plaintiff returned on November 23, with the rest of the $5,500 down payment and was provided with a receipt for the full down payment, similar to one provided for the initial $1,000 down payment, signed or initialed by both parties and indicating that “ALL DEPOSITS ARE NON-REFUNDABLE!” Plaintiff says he noticed accident damage and confronted Dealer’s agent, who denied it and threatened to keep the vehicle and the down payment. Plaintiff says he felt like he had no choice and went forward with the purchase. Dealer arranged financing and the parties executed a “Retail Installment Contract and Security Agreement”, which contained an integration clause:

Entire Agreement. Your and our entire agreement is contained in the Contract. Any change to this Contract must be in writing and signed by you and us.”

Within the first few days, Plaintiff noticed a shaking and difficulty controlling the vehicle at speeds over 55 mph and complained to Dealer, asking if he could return the vehicle.

Dealer declined the proffered return, but instead offered to fix it. Dealer arranged to have one tire replaced with a used tire and had the front wheels aligned, however the problems were not corrected. As the first payment due date was approaching on December 23rd, Plaintiff contacted the finance company to explain why he wanted to return the vehicle and the finance company said they would reach out to the dealership. On the following Saturday, December 26, 2020, Plaintiff got a call from the Dealer dealership wherein he says that they told him that they had bought the financing contract back and that Plaintiff would have to return the vehicle to them by the end of the day or they would repossess it. Plaintiff contacted the finance company again and was told that the dealer had not bought the contract back. Plaintiff estimates that he received 10 calls from Dealer on that day to the safe effect, and that he returned the vehicle to the dealer on the following Monday, which was the date that United Auto Credit did actually notify the Dealer dealer that it must repurchase the finance contract on the subject vehicle. He had two repossessions in the past and wanted to avoid further credit damage. Dealer told Plaintiff that no down payment would be refunded because he had defaulted by not making the first payment.

Dealer asserts that it is entitled to forfeit the deposit because its receipt says that it was non-refundable and because it called Plaintiff’s attention to a sign on the wall of their business saying that various fees would apply in the event of a return, such as a daily fee of

$39, a fee of 49 cents per mile, a restocking fee of $00 and a $500 Maryland Dealer processing fee. No signed document supports such fees and Dealer acknowledges it has never asserted or collected them before. Plaintiff asserts various claims under the Maryland Credit Grantor Closed End Credit Provisions (“CLEC”), Maryland Consumer Protection Act (“CPA”), the Maryland Consumer Debt Collection Act (“CDCA”), and claims for breach of Contract and Unjust Enrichment.

While Plaintiff has prevailed under various causes of action, the recoveries under each count may not be duplicative. Therefore, an award is entered in favor of Plaintiff and against Dealer for triple actual damages of $16,500, for emotional and mental distress of $20,000, totaling $36,500 plus reasonable attorney’s fees to be determined. Plaintiff is to submit its accounting for attorneys’ fees within 10 days. Dealer shall then have 10 days to respond. The Arbitrator will then assess the amount of reasonable attorney’s. fees.

Whitney, LLP represents consumers across Maryland in cases against car dealers.  Consumers who are treated unfairly with deceptive practices have many legal rights and can fight back.  The Federal Trade Commission has recently proposed additional regulations against dishonest car dealer – read more here.

Click Here to Read about our Top 10 Most Common Types of Cases against Car Dealers.

We offer Legal Consultations. Call Whitney, LLP at 410 583 8000, or use our Quick Contact Form, to discuss your potential case.  Here is our YouTube Channel  for more videos on car dealer legal issues.  Prior results are not a guarantee of future results, and all cases are different.