Some or all of the allegations made in the lawsuit may be disputed by Nationwide Nissan.

Although our client bought the car in 2018, the lawsuit was not filed until 2020 when the extent of the alleged fraud was discovered and she hired Whitney, LLP to represent her.  If you have been defrauded by a car dealership, even if it was years ago, you may be able to bring the lawsuit even though years have gone by. It depends on the facts, and Whitney, LLP’s attorneys can help you evaluate the timing of your claim, with a free consultation.

When Whitney, LLP’s lawyers represent the victims of car dealership fraud and dishonest practices, our attorney’s fees and case expenses are paid out of compensation we recover from the dealership. Our clients do not have any out of pocket expenses.  Examples of similar cases and settlements we have recovered for victims of auto dealer fraud can be reviewed here.

Our client is a 68-year-old woman who went to Nationwide Nissan’s dealership by herself. As an aside, it is always a dangerous situation for anyone who is not a finance expert to go to a car dealership by themselves.  Whitney, LLP has represented many cases of car dealership fraud involving single women who go to a dealership and are badly defrauded. We suggest that if you are a person with no experience in car dealership finance or car buying, you bring a second person who can help you evaluate the deal. Another set of eyes and ears on a car deal is always a good idea.

The allegations set forth in the lawsuit are as follows:

On August 7, 2018, Ms. X went to Nationwide’s dealership to purchase a new car.  She decided that she liked a new 2018 Nissan Kicks, which is a small SUV, but Nationwide did not have the grey color in stock that she wanted.  Nationwide said they would get the color she wanted by the following day. On August 8, 2018,Ms. X returned to the dealership. The grey 2018 Nissan Kicks that she liked had arrived, with a window sticker price of $22,800 (the “Vehicle”).

The finance manager told Ms. X to sign the Buyer’s Order, which she did.  The base price of the Vehicle was listed as $22,299.77, and included LoJack for a charge of $4,100, and another line-item of “Service Contract and/or Pre-Paid Maintenance” for $5,000.  A charge of $4,100 for LoJack is an astronomical amount of money, and indicates that the finance manager knew they had a customer they could take advantage of.

Car dealerships are required to provide all contract paperwork at the time of sale, including the car contract or lease agreement, warranty documents, vehicle service contracts, and other documents signed by the customer. Many customers do not know that if they are not provided with a fully signed copy of the contract at the time of sale, they are able to return the vehicle. 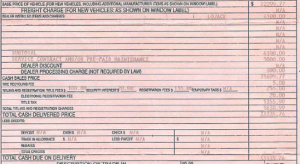 Original Buyer’s Order – Our client was given the pink carbon copy at the time of sale. 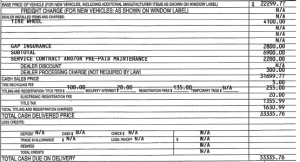 Alleged Forged Buyer’s Order – LoJack was changed to Tire and Wheel and GAP Insurance was added among other changes. Our client obtained this when she went back to the dealership months after the purchase when she discovered that the $4,100 she had paid for LoJack had been kept by Nationwide Nissan and LoJack had not been installed.

After purchasing the Vehicle and leaving the dealership, Ms. X experienced both a flood in her home and the death of a family member.  It took months to deal with and process these difficult life events.

In April 2019, Ms. X took a second look at the contract paperwork for the Vehicle, and realized she had not been given a copy of her LoJack contract or any of the other services she believed that she had paid extra for. Thereafter, later on in April 2019, Ms. X went to Nationwide’s dealership and asked to speak with a finance manager about her contract.  She met briefly with a finance manager, and asked if the LoJack had been installed on her Vehicle.

The finance manager responded that “once your car leaves the lot, we do not know what is on it.”  Ms. X asked him for the number for LoJack, which he provided. Several days later, Ms. X called LoJack’s corporate office, and asked an employee if the Vehicle had a LoJack system installed. She provided her information as well as the Vehicle’s VIN. The employee determined that no contract had been received by LoJack for the Vehicle, and there was no information in the system for the Vehicle. The LoJack employee asked Ms. X how much she had been charged for the LoJack. When Ms. X told her “$4,100” the employee gasped, and said “the charge for that is usually no more than $800.” Ms. X began to get a sinking feeling that something had gone very wrong.

It is not uncommon for dealerships to charge a huge amount of money for aftermarket products such as LoJack, warranties, dent and ding protection, tire and wheel protection packages and other products.  Our experience is that they will charge as much as they can get away with.

Allegedly Forged RISC dated 8/9/18 – Our client did not go to the dealership on 8/9/18, or use an e-signature, which this is. Also, the signature appears totally different. The finance terms are also different than on the carbon copy she originally received.

Ms. X then called Nationwide and requested a copy of all of the paperwork she signed as part of her deal for the Vehicle. She was told to come to the accounting office and pick up a copy, which she did. When she opened the envelope from Nationwide’s accounting office and reviewed the documents, she was shocked to see numerous documents she had not seen before, including many with her name signed on them. They included:

a) An allegedly forged Retail Installment Sales Contract that had been e-signed, and was dated August 9, 2018, the day after she had been at the dealership and signed the RISC that she received a carbon copy of.  The forged RISC includes charges for GAP insurance at a cost of $2,500, and a “Tire and Wheel” package for $2,500.

Generally speaking, the addition of aftermarket services to a forged Retail Installment Sales Contract is done not to benefit the unaware victim of the forgery, but because the corrupt finance manager and dealership are able to increase their profits by increasing the number of aftermarket products they “sell” to a customer.

The law in Maryland specifically prohibits dealerships from committing fraud to make a sale. However, that does not stop dishonest car dealerships from lying and misrepresenting in order to make an illegal profit.

The Maryland Transportation Code Ann., § 15-312(b) titled “Prohibited Acts – – Vehicles Sales Transactions,” reads as follows: “Making material misrepresentations in obtaining vehicle sales contracts. – A dealer or an agent or employee of a dealer may not make any material misrepresentations in obtaining a vehicle sales contract.”

The Maryland Transportation Code Ann., § 15-312(c) titled “Prohibited Acts – – Vehicles Sales Transactions,” reads as follows: “Fraud – – A dealer or an agent or employee of a dealer may not commit any fraud in the execution of or any material alteration of a contract, power of attorney, or other document incident to a sales transaction.

While these two statutes are laws, car dealerships are also require to follow administrative regulations set forth by by the Motor Vehicle Administration, known as the MVA.  Those regulations can be viewed here.

On behalf of our client, Whitney, LLP sued Nationwide Nissan, and filed the lawsuit alleging fraud, fraudulent concealment, violation of Maryland’s Consumer Protection Act, and invasion of privacy.  The compensation sought includes actual damages, emotional distress and punitive damages. These are all common legal causes of action when Whitney, LLP represents a customer suing a car dealership in a matter involving allegations of forgery and fraud.

Whether you were victimized by forgery, fraud, charging for warranties that were then canceled, be cheated out of a down payment that was kept illegally, or any other fraud, we offer a Free Consultation, and provide representation at no out-of-pocket cost.  Call us at 410 583 8000, or use our Quick Contact