Forgery and fraud are serious words that many people hear about but never think it will happen to them. When it comes to purchasing a new or used vehicle in Maryland, forgery and fraud are problems with buying a new car that the consumer fraud and forgery claims attorneys at Whitney, LLP handle routinely.  Surprisingly enough, about half of the fraud and forgery cases that the consumer auto fraud lawyers at Whitney, LLP represent clients in involve large, new car dealerships.

The other half occur at used car lots, both high end and low end. The common denominator is greed, which is present across the spectrum of car dealerships, from new car to used car, selling good cars and bad cars, to people with great credit and low credit scores, and everything in between.

Due to the large amount of forgery and fraud cases that Whitney, LLP has been contacted about, we are now offering a Free Car Contract Forgery and Fraud Review to Maryland residents.  Use our Quick Contact Form to contact us through our website, email us your documents at info@whitneyfirm.com with FREE CAR CONTRACT REVIEW in the Subject Line, or just call us at 410 583 8000.

We will quickly obtain the necessary paperwork to review what the dealership sent to the bank against your original documents, at no cost to the consumer, and then provide legal representation to obtain compensation for any forgeries that were committed. 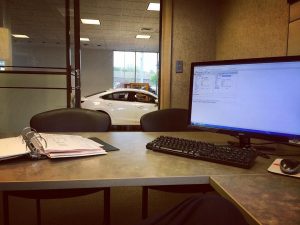 I Just Bought a Car and My Signature Was Forged

With thousands of new and used cars sold throughout Maryland every month, even if a small percentage of Retail Installment Sales Contract and Sales Contracts are forged, that still means dozens or hundreds of new and used car buyers are being taken advantage of every month – and that means that all of those car buyers whose names were forged have strong legal claims for compensation against the new car dealership or used car seller that committed the forgery and fraud.

Whether the fraud or forgery occurs at a new car dealership or a used car lot in Maryland, the reason for the fraud and forgery is the same: profit.  Common example that the car contract forgery attorneys at Whitney, LLP have seen usually happen like this: the customer chooses a car they want and negotiates the price.  Then the car buyer goes into the finance manager’s office. Together with the finance manager, the consumer car buyer negotiates the interest rate, the cost of an extended warranty, dent and ding protection, wheel and tire protection, and other insurance-type add ons.  The consumer decides whether or not to purchase these add-ons, a price for what they do want to purchase is agreed upon, and the Retail Installment Sales Contract, or RISC, is signed along with some other documents. The customer is given a copy of all paperwork they signed, the consumer thinks the deal is done, and thinks that the finance manager will send the signed contract and paperwork to the bank to complete the deal.  However, if the finance manager is dishonest, the paperwork the customer signed will never be sent to the bank. New paperwork with different numbers that create more profit for the used car seller, or the finance manager, will have the customer’s forged signature applied and those will be sent. Many times, the customer will never know their signature was forged.

Finance Managers forge signatures for one of two reasons – greed and profit, or laziness.  In the eyes of the law, the reason does not matter, and the fact that it happened is enough to bring a serious legal claim.  Two common examples that the vehicle contract forgery lawyers at Whitney, LLP have seen are as follows:

We had a case against a very large new and used car dealer where our client had bought a used car.  After she signed the paperwork she realized that the VIN on her paperwork did not match the VIN on her car.  She went back to the dealership and met with her salesperson. The salesperson told her that they already had the paperwork with the correct VIN and showed our client a set of paperwork with the correct.  Our client immediately saw that 8 different signatures had been forged even though the numbers were exactly the same. In this situation, the forgeries were committed because the dealership was too lazy to call her and ask her to come back and sign the correct paperwork.  Although she had just caught the dealership red handed forging her signature, and she asked to speak with the general manager, she was ignored until she called the consumer fraud and forgery attorneys at Whitney, LLP. Attorney Daniel W. Whitney, Jr. accepted the forgery case, without any payment or expenses paid by our client until we recovered compensation for her, and contacted the dealership.  They quickly for a significant amount of compensation for our client to avoid a public lawsuit.

Whitney, LLP consumer forgery lawyers recently successfully settled a case where our client bought a new car, financed it through a bank, thought the deal was done.  However, our client, who actually worked at the dealership where she bought the car, began to hear rumors that there was a practice of the finance manager adding ding and dent protection to car sale contracts.  She then requested a copy of her car sale contract and paperwork from another person at the dealership, and confirmed that the rumor was true – her paperwork contained her forged signatures on (1) the contract that had been submitted to the bank which had been changed to show she purchased a ding and dent protection plan, and (2) forged signatures on a contract saying she had agreed to purchase the ding and dent protection.  Once she detected the forgeries, she contacted Whitney, LLP’s vehicle forgery lawyers. We accepted her case, contacted the dealership, and quickly settled her forgery case with the dealership after a few calls with their lawyer. Again, the dealership did not want to be publically sued and instead decided to settle quickly for an amount of money our client was very happy with.

Interestingly enough, the monthly payment that our client had agreed to was exactly the same, and she had basically been given an extra ding and dent protection plan, although she was never informed about it.  So why were the forgeries committed? The reason is profit – Almost all finance managers in Maryland are paid in part based on how many after market products they sell – these after market products include extended warranties, wheel and tire protection, and dent and ding protection plans. So, in this case, the finance manager decreased the price of the car to be able to include an after market product so his production numbers, and therefore his monthly check from the dealership, would be bigger.  Not only did the finance manager cheat our client, he also cheated his own dealership. There is no honor among thieves, which includes dishonest finance managers. 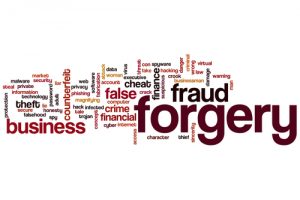 There are only a few way that a consumer car buyer can discover that their signature was forged on the car buying paperwork.

However, dishonest finance managers are somewhat smart, and are usually good enough with numbers to change the numbers around to make additional profit and still have the payment be the exact same.  Because of this, the second way to find out if any signatures were forged is to go back to the dealership a few weeks after they purchased the car and ask for a copy of their paperwork – this way the customer can compare what the dealership has on file, which is usually the paperwork that was submitted to the bank, against their own original documents.

However, the third way is the best way to determine if a buyer’s signature was forged.  Simply call the finance company or bank who financed the car loan and tell them you want them to send a copy of the paperwork they received from the dealership or used car seller to you. Then compare the two side by side.  If anything is different, especially if a signature is forged, the customer now has a very strong legal claim and should contact  Whitney, LLP to discuss moving forward with a  forgery and fraud claims against the dealership.  If you suspect your documents were forged, Whitney, LP will obtain the documents submitted by the car seller to the bank at no cost to you for a free forgery review.

Whitney, LLP’s consumer lawyers want to speak with you if you or anyone you know, or suspect, that their signature was forged on any documents involving the purchase of a new or used vehicle. Consultations are always free.

Contact Us Now at 410 583 8000 to speak with our law firm or use our Quick Contact Form to tell us what happened, or to begin the Free Car Contract Forgery Review, and we will call you as soon as possible.