A guest complaint of a bed bug bite at a hotel should trigger a prompt inspection by a licensed pest control professional. There is a wide range of competency among pest control technicians performing bed bug inspections. Whether a bed bug or evidence of a bed bug is found depends upon how thorough a search is performed. A proper inspection will require the technician to look not only for live bed bugs, but also for dead bed bugs, nymphs, bed bug skin casings, blood stains, fecal stains and bed bug eggs. “Infestation” means the finding of one live bed bug. Unfortunately, even a thorough visual inspection may fail to spot evidence if the “scene of the crime” has been disturbed. For example, removal of blood stained sheets prior to the performance of inspection, or vacuuming of bed bug casings and carcasses may eliminate important evidence.

The Meaning of “No Activity”

At times the pest control service technician will report finding “no activity.” The report may even fail to document that the guest captured a bed bug. This raises the question of: What does “no activity” mean? For starters, it does not necessarily mean that no bed bugs are present in the inspected rooms. Hotel employees often mistakenly interpret “no activity” to mean “No bed bugs. The room is clear.” Even large national pest control companies disclose in their bed bug service contracts that a visual inspection does not guarantee that bed bugs will be found even if they are present. Typically, carpets, upholstered items and curtains are not cut open for inspection, yet such actions increase the likelihood of finding bed bugs. Without such actions, any bed bug activity will be less likely to be found. 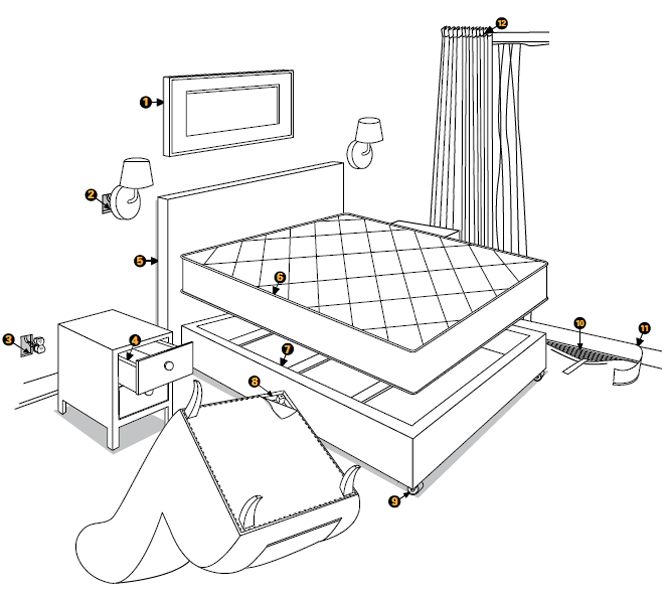 “No Activity” May Mean an Inadequate Inspection was Performed

When confronted by an unexpected “negative” report, in the face of a multitude of bites, the guest should raise the following questions:

If an inspection yields a service report stating “no activity,” yet the room is then placed out of service for a prolonged period, and receives multiple treatments with gallons of E.P.A. registered pesticides, there is reason to be suspicious of whether “no activity” really means an absence of evidence of a bed bug. A pattern of hotel guests reporting characteristic bed bug bites, followed by denials of claims based on inspection reports finding “no activity,” can lead to an inference that the hotel and pest control company have a tacit understanding not to create unfavorable documentation of a problem. For this reason, “no activity” reports should be interpreted with a healthy dose of skepticism.

How a Guest Can Attempt to Preserve Evidence

If a hotel guest experiences what appears to be a significant number of bed bug bites, and is told that the hotel’s pest control company found nothing, one possible way to counter unethical business practices is to request the manager (in writing via email or text message) to have the room re-inspected by an independent company providing inspections by bed bug scent detection dogs. Properly trained dogs are able to detect bed bugs, nymphs and bed bug eggs in cracks and crevices beyond the visualization of a human inspection. To avoid exposing the dog to harmful pesticides, the canine inspection must be performed prior to the application of pesticides. Such an independent inspection has the potential to preserve evidence which would otherwise not be documented. An independent company, not bound by a national contract, may also be less likely to have incentive to fudge service records in order to maintain good relations with an important customer. If a guest sustains a serious allergic reaction to a multitude of bites, then consideration should be given to offering to pay for the canine service if that appears to be the only way to preserve key evidence. In all likelihood, if the hotel has something to hide, it will not agree; but at least the attempt was made to preserve evidence, and the hotel may suffer adverse legal consequences.

Contact Whitney, LLP for a free bed bug claim evaluation.  Our attorneys have successfully resolved claims against many of the largest hotel chains in the world, as well as many smaller hotel brands.  Whether a claim involves a few bed bug bites or hundreds of bites, we handle the claims process, file a lawsuit if necessary and work towards recovering compensation for injuries, property damage and other economic loss.  Contact us at 410 583 8000, or send an email using our website’s Quick Contact Form.