The commercial trucking subsector of the transportation industry is absolutely vital to the U.S. economy, accounting for a staggering $642 billion in revenue in 2012 alone. Unfortunately, the industry’s financial importance has also created a serious problem for all drivers who share the road with professional truckers: widespread trucker fatigue.

Truck drivers are under intense pressure to complete fast journeys with rapid turnarounds.  As a result, drivers sometimes ignore and violate the hourly limits which are there to protect the general public’s safety.  Legislative efforts to increase the existing limits have made the problem even worse, eroding these vitally important safeguards.  However, commercial trucks are not the only potential hazard for drivers, cyclists, and pedestrians: passenger trucks can also cause catastrophic car accidents due to factors like reckless driving, aggressive driving, or intoxicated driving. 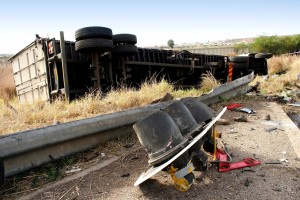 If you were injured in an automotive accident involving a commercial or passenger truck, you may be entitled to compensation for your pain, suffering, and financial losses.  The attorneys of Whitney, LLP can help.  Our personal injury lawyers have years of experience helping residents of Baltimore and the surrounding area fight for the compensation they deserve, and we dedicate our practice to balancing compassionate client advocacy with aggressive litigation strategies.  To learn more about how our truck accident lawyers may be able to assist, call the law offices of Whitney, LLP right away at (410) 583-8000.

The problem of commercial truck drivers becoming tired or falling asleep at the wheel is so widespread it even has its own name: trucker fatigue.  The phenomenon of trucker fatigue has been extensively documented and studied by federal road safety organizations within the U.S. DOT (Department of Transportation), such as the NHTSA (National Highway Traffic Safety Administration) and the FMCSA (Federal Motor Carrier Safety Administration).

So just how big is the problem?  According to one written statement by the DOT, taken from an article titled “Why We Care About Truck Driver Fatigue,” “ Nearly 4,000 people die in large truck crashes each year and driver fatigue is a leading factor.”  Compiling data taken from the Michigan State Police from 1996 to 2001, the FMCSA found that driver fatigue was a risk factor among 2.6% of large truck drivers, compared to just 1.8% of drivers with illegal drugs as a factor and only 1% of drivers with alcohol as a factor.

The FMCSA mandates rigid hours-of-service regulations which are designed to reduce the incidence of trucker fatigue and keep the public safe.  Unfortunately, these regulations are a subject of ongoing controversy and are subject to changes which are detrimental to drivers and pedestrians everywhere.  For example, the FMCSA used to impose a 60/70 hour limit rule, which prevented truck drivers from exceeding 60 to 70 hours on duty during an seven to eight day period.  Unfortunately, this crucial regulation was suspended by the Consolidated and Further Continuing Appropriations Act of 2015, which was enacted on December 16, 2014.

While the issue of driver fatigue is typically associated with commercial drivers, fatigued passenger drivers can also create deadly road situations.  In one report, the NHTSA found that “of the 1,456 adult drivers surveyed by the National Sleep Foundation (NSF) in fall 2004, 60% reported that they had driven while feeling drowsy at least once within the past year. Further, 37% said they had ‘nodded off or fallen asleep’ while driving a vehicle at least once in their life.”

Passenger and commercial truck accidents involve tremendous physical forces.  Most passenger trucks weigh several tons, while commercial trucks like 18-wheelers (semi-trailer trucks) can easily weigh tens of thousands of pounds.  The fact that many commercial trucks are loaded with flammable and/or toxic cargo loads only increases the danger.  When such massive, fast-moving vehicles collide with a car, motorcycle, bicycle, or pedestrian – potentially while transporting materials which are classified as a biohazard – the result is often catastrophic injury or wrongful death.

If you or someone you love was injured in a truck accident or other type of automotive accident, or if you are the spouse or relative of a wrongful death victim, the attorneys of Whitney, LLP encourage you to call us at (410) 583-8000 to see how we can help.  Your consultation is completely free of charge, and we will always keep your family’s information confidential.  Our lines are always open, any time of day or evening.  While our law offices are located in Towson, MD, we are prepared to handle cases arising throughout the greater Baltimore area.