A negligent termite inspection resulted in a Maryland homeowner recovering $125,000.  After making an offer, and before closing on their new home, the husband and wife (“Buyers”) hired a licensed pest control company to perform a careful visual inspection for evidence of wood destroying insects (“WDI”). Laypersons often call this the “termite inspection.” The Buyers bought the house “AS IS,” but the Contract of Sale provided the right to terminate the contract if Buyers were dissatisfied with the results of an inspection. Like most people, the Buyers had no interest in buying a house with termites or termite damage which can be an expensive nightmare to deal with.

Call Whitney, LLP’s Maryland termite damage lawyers at 410 583 8000, or use our Quick Contact Form, to discuss your potential case.  Here is our YouTube Channel  for more videos on termite damage and termite legal issues.

Very often, WDI Inspections are rushed through and signs of a problem are not detected.  There are certain WDI companies in the Maryland area that are known to “rubber stamp” a WDI inspection.  Buyers should always exercise due diligence in selecting the company to perform the WDI inspection. 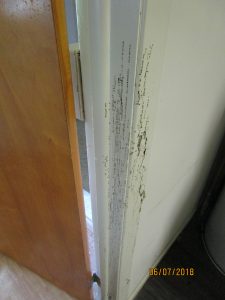 Termite emergence on a painted over bathroom door found after closing

Shortly after closing, the new homeowners discovered “sawdust” on the floor next to some damaged wood molding. There are multiple reasons why floor molding may be damaged. For instance, the wood may be damaged by direct physical trauma, by water or wood destroying insects such as termites. The new homeowners called another pest control company for a second opinion.

Termite damage was found at that location which turned out to be the tip of the iceberg. Termite damaged wood is hollowed out by distinctive galleries along the grain. Sawdust-like termite fras may also appear. When in doubt, competent WDI inspectors prob or sound the area to confirm the presence of termite damage. Once walls and ceilings were opened up, extensive damage to wall framing and joists was uncovered. The estimate to repair and restore the property was about $90,000.

The Buyers at first did not think they had any recourse. Termite damage claims typically are not covered by homeowners’ insurance. However, they did some online research and discovered that Whitney, LLP has experience obtaining compensation for homeowners who are deceived into buying a home with undisclosed termite damage.

Whitney, LLP investigated the matter and hired the necessary experts. A Complaint was filed and depositions were taken of the pest control company employees. Following negotiations, the case settled for $125,000. 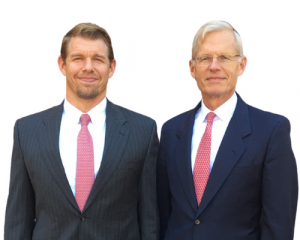 Our attorneys represents homeowners across Maryland in termite damage claims and cases.  It is unfair for homeowners to be deceived into purchasing a home that contains termite damage that should have been detected or disclosed. When hidden termite damage is found, call us for a legal consultation.