On October 25, 2019, Whitney, LLP’s auto fraud lawyers filed a lawsuit against Prime Autos, LLC in Glen Burnie, MD, and its owner, Robert H. Tuck, on behalf our client, alleging Fraud, Fraudulent Concealment and violations of Maryland’s Consumer Protection Act arising out of the sale of a used 2008 Ford F-350. The following allegations are set forth in the complaint that was filed against Prime Autos, LLC and Robert H. Tuck in the Circuit Court for Anne Arundel County. Both Defendants may very well dispute some or all of what has been alleged.

Contact us now at (410) 583-8000 or use our online Quick Contact Form.  Some of our auto fraud settlements from past cases can be reviewed here.

Our client  purchased the 2008 Ford F-350 in July 2019 as a gift for his son.  Maryland law requires that vehicles sold to consumers pass a safety inspection, known as the Maryland Safety Inspection. Within a week of the purchase, he noticed oil leaking from the vehicle in his driveway. After calling Prime Autos and speaking with an employee regarding the oil leak, he was informed he could take the vehicle to them, or to his own mechanic, to get an inspection and estimate on repairs. He decided to take the vehicle to his trusted mechanic, who found thousands of dollars of work that needed to be performed.  Even more unsettling was the discovery that the catalytic converter and EGR had been removed.

His mechanic informed him that the vehicle should not have passed the Maryland inspection without those items.

On the same day after the Maryland State Police Investigator failed the vehicle, our client   drove to Prime Autos and spoke with Robert H. Tuck about the missing equipment. Our client alleges that Tuck told him that he had told his lot mechanic to remove the catalytic converter and EGR from the vehicle after it had passed the Maryland inspection, and that Tuck then said “everyone takes this stuff off.”

To his surprise, as he drove by Prime Autos, he saw the vehicle parked on the lot and being advertised as “for sale” to the general public.  He stopped and took photographs of the vehicle, and was confronted by Defendants’ employees, who again said they would repair the vehicle.  Our client then continued to the MVA and filed a complaint against Prime Autos, LLC.  Our client also realized that despite purchasing the vehicle months ago, he had not received the title or registration.

Several weeks passed before our client was told by Prime Autos that vehicle was repaired.  However, the first day after getting it home, the engine light came back on, and our client   discovered that there was no transmission fluid or no oil in it.  Our client  then filled those fluids. Three days later, while driving the vehicle to the MVA in Glen Burnie to get the license plates for the vehicle, and then driving to a Ford dealership to have a comprehensive inspection performed on the vehicle, the vehicle lost power while being driven on I-695. Despite the vehicle failing, our client   managed to drive to the side of road and avoid a collision.  The vehicle would then not start. The vehicle was towed to the Ford dealership, where it was determined that, among other issues, an old, clogged catalytic converter had been installed onto the vehicle, and the clogged catalytic converter had caused the engine to fail.

Our client then had the vehicle towed to his home, where it sits, inoperable, while our client   is forced to make the payments on the loan to protect his credit rating.  After trying for months to resolve the problem, our client contacted Whitney, LLP and we accepted the case.  After evaluating the facts, it became apparent that our client had been tricked into purchasing a vehicle that could not pass the Maryland inspection due to the catalytic converter and EGR being secretly removed, and had been placed into serious danger due to faulty repairs causing the vehicle to stop working while driving on 695.  It is a miracle that our was not killed or seriously injured when that happened. 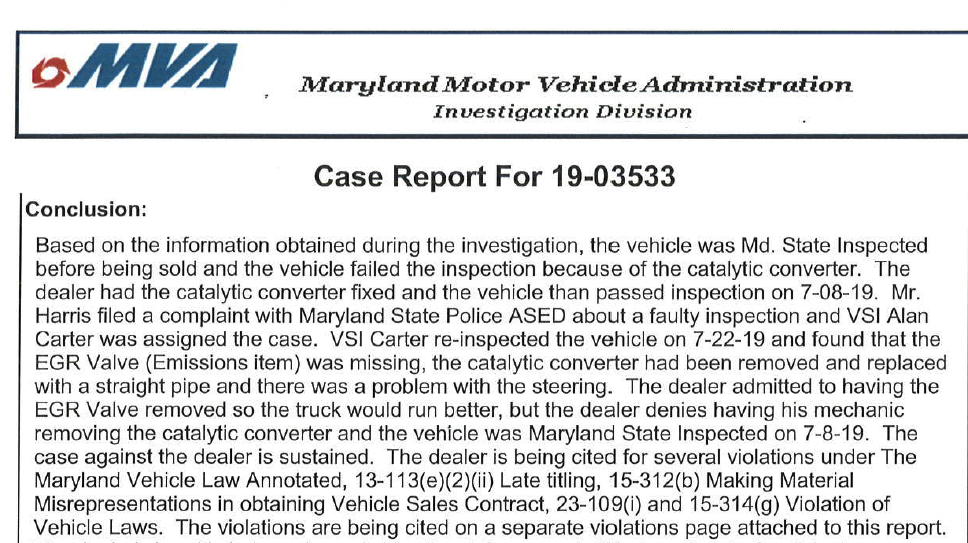 After the MVA completed its investigation, it cited Prime Autos for multiple violation of the Maryland Transportation Code, listed below, and the bond was release. When a car dealer’s bond is released, that means the MVA provided the bond information to the customer, who may now make a claim against the bond.  Whitney, LLP assists consumers with bond claims against unlawful dealerships.

If you have purchased a vehicle from PrimeAutos in Glen Burnie, Maryland you should immediately have the vehicle inspected to see if the catalytic converter or ERG was removed.  Or, if you had any other problems with your car or truck purchase there, including potential fraud, misrepresentations, damage, or other types of potential claims, contact Whitney, LLP to discuss your options.