“Maryland law firm finds a niche specialty: bed bug cases” is the title of the article written by Eric Neugeboren and published on June 15, 2021 in the Daily Record.

See below for the full article, or click here for the PDF of the article

Whitney, LLP’s attorneys for bed bugs specialize in Maryland bed bug cases and have recovered over $14,000,000 for our clients in bed bug claims cases, verdicts and settlements.  Consultations are always free.

If you are dealing with bed bugs bites and infestations in Maryland, our bed bug lawyers may be able to help.  We provide representation in bed bug infestation cases across Maryland.

What Is Your Case Worth? We offer Free Consultations. Call us at 410 583 8000, or use our Quick Contact Form, to discuss your potential case.  Here is our YouTube Channel for our videos on responsibility bed bug infestations and legal rights. 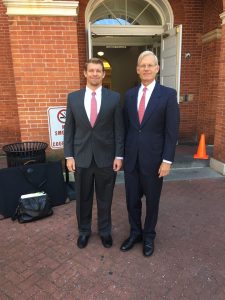 In 2018, Esmeralda Herrera was living in an apartment in Glen Burnie when she began noticing an infestation in her room. Mice came out daily, she said, cockroaches covered the bed and bed bugs scattered up the wall.

She was living with her young son and newborn daughter, and they had to leave their apartment for five to six hours weekly when cleaners tried to resolve the problem. Her son’s body was covered in bed bug bites, she said.

She told the management company she would not pay rent until it resolved the problem. The company said it would take her to court for eviction, and she was eventually evicted. She was homeless for a month, she said.

“It was honestly the worst experience I think I’ve ever had living anywhere,” Herrera said.

At the time of the infestation, Herrera got in touch with Whitney, LLP, a Maryland law firm that includes bed bug litigation as one of its focus areas. She sued the apartment complex, winning an undisclosed amount, she said.

In an era when law firms generally focus on one or a handful of specialty practice areas, say, immigration law or workers’ compensation, the Whitney firm has one of the more unique specialties: bed bugs.

Whitney — whose attorneys include father and son Daniel Whitney Sr. and Daniel Whitney Jr. — has pursued bed bug cases since the early 2010s. It is one of the select number of firms in the country to offer legal services for bed bug issues, Whitney Jr. said.

The firm has recovered more than $14.3 million in bed bug settlements, said Whitney Sr., who is the firm’s managing partner.

Baltimore is known for bed bug infestations. Since 2017, Baltimore has held a top-two spot in an annual list from Orkin — a pest control company — of the top cities for bed bugs across the United States. The ranking is based on data from metro areas where Orkin performed the most bed bug treatments in a given year.

The Apartment and Office Building Association of Metropolitan Washington is an organization whose members include owners or managers of commercial and multifamily residential properties. In a statement, AOBA said “preventing and addressing bed bugs requires a partnership between residents and on-site property management staff centered on effective communication and early detection.”

The statement said if a resident calls about a potential bed bug problem, it is important that the unit, in addition to adjacent units and those above and below, are inspected by maintenance staff. Pest companies are retained if any bed bugs are detected.

The statement added that “treatment is impossible if a tenant chooses not to cooperate in permitting inspections and treatments or in the de-cluttering of his/her unit and the treatment of his/her personal effects.”

Whitney Sr. said he became interested in pursuing bed bug cases after his daughter came home from studying abroad around 2010. The person she was traveling with had bug bites on her arm, and she thought she may have brought the bugs home in her luggage.

“I was thinking, what are the implications of this in terms of the liability of hotels, potential landlord-tenant situations?” Whitney Sr. said. “And thought this actually is an area that could involve litigation.”

Some landlords initially try to argue that they don’t have any notice of a bed bug infestation, Whitney Sr. said. But the firm often has sufficient evidence to prove the property owner had actual knowledge of an infestation or “constructive notice,” he added.

The firm’s clients often preserve evidence of bed bugs, Whitney Sr. said. The firm can then argue that the property owners should have known of the bed bugs.

“If your housekeepers had been properly trained and heeded their training, they would have seen signs of bed bugs,” Whitney Sr. said.

The firm has also subpoenaed records for prior occupants of a particular unit, sometimes finding that they had reported bed bugs, Whitney Sr. said.

It’s not as if bed bugs are the only legal issue the firm handles; it also takes on cases involving car dealership fraud, real estate fraud and other matters

Still, as Whitney Jr. said, as the firm litigates more bed bug cases, the public becomes more aware that lawsuits are an option for them.

“We’re raising the general public’s awareness of bed bug litigation one lawsuit at a time,” he said.